League of Legends: How to Level Up Fast

Log in every day and you’ll get a “First win of the day” mission to complete.

Our League of Legends How to level up fast guide contains advice on the best ways to level up and reach Summoner level 30 quickly.

If you've recently got the League of Legends bug, then you're probably aiming to join the competitive ranks, climb the ladder and seeing how you stack up against players of a similar skill level.

As a new player, you can't just jump into the League of Legends ranked system right off the bat. First, you'll need to reach Summoner level 30 in order to do so. It's a frustrating restriction for players who feel like they're ready to get involved, or for those who already have a high level alternate account, but Riot has put it in place to make sure you really understand how the game works. It's a slow grind to get there, and there's simply no escaping it - you've got to buckle in.

To help you get there a little faster, we've put together a guide which contains some of the best ways to increase your level in League of Legends. If you think we've missed anything out, don't be afraid to chime in with your comments below and we may feature them in the article itself.

It goes without saying that winning matches in League of Legends will net you more EXP than losing them. This means that to level up you’ve got to aim for the win. With this in mind it’s best to party up with a like-minded friend for extra coordination!

Log in every day and you’ll get a “First win of the day” mission to complete. It’s available once you hit level 15 and rewards you with 400 bonus EXP after winning a matchmade game. This makes it well worth logging in every day even if you can’t commit to a few games, as you’ll still earn a decent amount of EXP if you manage a quick victory.

It goes without saying that this little boost takes a day to reset, so make sure you're logging in everyday to maximise your rewards.

A boost temporarily increases the amount of EXP you’ll earn at the end of each match. There are two kinds of boost: Duration and Win Boosts.

Both of these Boosts can be purchased from the Riot Store using Riot Points, which you’ll have to fork out real world currency for.

Duration Boosts offer double the base EXP earned from a game, while Win Boosts add a healthy 210 XP on top of any match you play.

Duration Boosts last for a certain period of time, while Win Boosts will only be applied if you Win a game and only expire once you’ve won a certain amount.

Essentially, this is one of the best ways to level up fast as it’ll give you a much needed...well, boost to the EXP you earn from most/all of your matches.

The short version of this monstrous community calculation by Rismosch says that purchasing a Per-Win EXP Boost and spamming Twisted Treeline botgames is a great way of levelling fast. All you had to do is keep the games around 8 minutes long to cash in the maximum amount of EXP possible.

While it's made clear that Summoner's Rift will offer you better overall EXP gains, pairing Twisted Treeline with a Per-Win Boost is still a decent option if you're strapped for time. The games are shorter and far easier against bots, compared to the slog that can be a tough Summoner's Rift match.

Seeing as you'll want to win games as fast as possible, it's important that you pick an aggressive champion that's capable of having a serious impact in-game. Playing the ADC, Midlane or Jungle role will guarantee that your champion will be capable of handling themselves and swinging the outcome of a match in your favour from the outset.

If you manage to get ahead in lane, we'd recommend helping out your other laners. This way you'll increase your chances of winning multiple lanes, and in turn, your chances of snowballing towards an early victory.

League of Legends isn't exploitable when it comes to levelling at lightning speed, so that's why this tip might seem like a frustrating kick in the teeth.

There's simply nothing for it but to play as often as you can if you want to level up faster as there's no other way round it really.

If you know that you've got some time to sink into the game, then it's probably worth purchasing a Boost to up your EXP total. 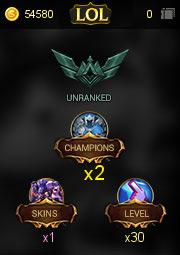 To further increase your chances of winning more matches, we'd highly recommend choosing champions which are strong in the current meta. For a better idea of who is powerful, our best jungler, ADC and Mid laner pages are a good place to start!

Finally, if you're going to play plenty of matches - and win them - you'll increase your chances by grabbing some friends of a similar ability. You'll be able to coordinate ganks, talk strategy, and generally have a slightly easier time of things.

Become a better player by reading champion guides on websites: https://www.igvault.com/League-of-Legends-Accounts You can Sell League of Legends Account or find guides on the sites for any champion you would like to play, as well as other guides for general tips and information about the game, masteries, and rune pages.

Los Angeles Rams at Arizona Cardinals: 5 Cardinals in direction of keep track of

How to Take Care of Thin Hair?

You have reached your limit of 5000 friends!

File size error: The file exceeds allowed the limit (9 GB) and can not be uploaded.

Unable to upload a file: This file type is not supported.

We have detected some adult content on the image you uploaded, therefore we have declined your upload process.

To upload images, videos, and audio files, you have to upgrade to pro member. Upgrade To Pro